Czarnorzecko-Strzyżowski Natural Landscape Park protects the most valuable sites of the Strzyżowskie and Dynowskie Highlands separated by the Wisłok River's antecedent valley, and makes them available for leisure and tourist purposes.
To protect the natural landscape park against adverse external conditions and in order to preserve aesthetical qualities of the landscape, the park has been surrounded by a 34 392 H large protection area which forms its buffer zone.
Czarnorzecko-Strzyżowski Natural Landscape Park is located in the the West Carpathians Province, in the south part of the Strzyżowskie Highlands and in the south-west part of the Dynowskie Highlands separated by the Wisłok River's valley. It mainly comprises of the hills range which differs from the northern, lower parts of the Dynowskie and Strzyżowskie Highlands and (even more so) from the Jasielsko-Krośnieńska Dale from the south side. The park's highest mountain – Sucha Góra (585 m), towers 300 meters above the bottom of the Jasielsko-Sanockie Pits.
The main hills range runs (in a typically Carpathian manner) from north-west to south-east. It starts on the west from fragmented banks of the Klonowa Góra (525 m), Bard (534 m) and Chełm (528 m) mountains. Then it lowers and descends in the direction of the park's largest river - Wisłok. A chain of gradually elevating hilltops stretches behind an interesting gorge called the "Frysztacka Gate", they include: Herby (469 m) and Czarnówka (491 m) mountains, which via several smaller hills are connected with Królewska Góra (554m) and Sucha Góra (585m) separated by the Czarny Potok Valley. Another range with thinner woodstand runs from the Sucha Góra towards the Stobnica Valley; it consists of the following peaks: Czosnki (476 m), Kopce (484 m) and Grudna (479 m). Short and somewhat alienated Czarny Dział (479 m and 516 m) and Brzezanka (477 m) hilltops are situated to the north from the Sucha Góra massif.
The landscape park belongs to a large geological unit, i.e. Flish Carpathians, which were formed in the course of Alpide orogeny processes. Geological bed originates from cretaceous period (Mesozoic era) and tertiary period (Cenozoic era), its rocks form the so called Carpathian Flish. The bedrock comprises sandstones featuring diverse levels of concentration: loams, argillaceous silts, marls and puddingstones formed in alternate layers. The rocks form several layers with different composition, which were exposed to tectonic processes, as a result of which they were gradually pushed north as huge nappes and finally covered previous formations. Three layers of the Carpathian Flish - Silesian Nappe, Lower-Silesian Nappe and Sokolska Nappe are alternately located on the park's area shaping the geological structure of the site.
Geological structure influences altitudinal hill system (typical of flish foothills) separated by land falls which are intersected by rivers and streams. The highest mountain ranges in the area similar to the highest mid-mountainous level with steep, very often edgy slopes. Aside from mountain ranges there are also wide land falls creating the landscape of flat and small hilltops with slopes inclined by 5-15 degrees and trough very often flat-bottomed valleys. Preserved storeyed layers, e.g. Klonowa Góra range which transforms into the Jazowa massif behind the Wisłok gorge, is very characteristic element of the site. Clusters of small rocks dispersed on the hilltops have diverse physical composition and could be described as standalone outcrops of original shapes. This unique topography as well as landscape qualities are well-protected by "Herby" - forest and geological reserve. The title of the most renown and noticeable element of the Hillside, however, shoud be given to impressive and fancifully shaped sandstone rocks located in the "Prządki" geological reserve and nearby the Kamieniec castle in Odrzykoń.
Numerous groups of rocks may be also found in Pietrusza Wola, Łączki Jagiellońskie and Wola Komborska, where one of the hat-shaped rocks was named after "Konfederatka" (a national Polish hat) and is protected as a nature monument. The above mentioned rock formations are mainly located on the hilltops. These denudative rocks were created during geological processes of hilltops lowering and hillsides withdrawal. Ambos, walls and sills may be spotted in the area.
Tectonic caves prove that the Park's geological formation is very varied. The most renowned caves are located close to the Królewska Góra.
The south slope of the Sucha Góra, on the other hand, features several cave-like galleries which were formed in the course of underground sandstone output.
The park and its buffer zone are located in the Carpathian eco-climate zone in the submontane macro region. The climate, in comparison to the remaining area of Poland (aside from the Sudetes) is cool and humid. Basically, it has the quality of a mountainous climate, i.e. air temperature lowers while precipitation increases along with the increase of height above sea level.


FLORA
Flora of the vascular plants occurring in the Czarnorzecko-Strzyżowski Natural Landscape Park covers more than 800 species. Mountainous species constitute approx. 7.5% of the entire Park's flora. Montane species connected with mountainous forests level play the most important role in a group of mountainous plants. Number of other mountainous species populating other types of vegetation levels is smaller. Subalpine species do not occur in the Park. A group of submontane species, typical of lowland layer covers only 5 taxa. Xerothermic (thermophilic) plants include only 124 species (i.e. approx. 15% of entire flora). 64 protected species have been observed in the park, 48 are currently fully protected, while 16 are subject to seasonal protection. Most interesting specimen are as follows: Arum alpinum, ostrich fern, hart's-tongue fern, French rose, alpine squill, Staphylea pinnata and European yew.
Synanthropic species which live near, and benefit from, human habitats constitute approx. 20% of the park's flora (177 species). Such species include native plants, old synanthropic plants associated with human habitats for thousands of years, newcomers with unknown proliferation history and agricultural species growing close to their original planting places.
Among non-forest flora, entirely indigenous plant communities which originate, live and reproduce independently of human activities are relatively rare. Plants of this type include shrubs and wicker communities overgrowing riverside stones and herb communities. Such habitats include, e.g. riverside and stream stones, underground waters outflows and other water outflows. Developing herb communities of butterburs and great horsetails are believed to be entirely natural. Plant communities overgrowing lowland moors, e.g. Caricetum davallianae with cottongrass have utterly natural origin and properties. Significant part of herb communities has almost natural properties. Many reeds, herb communities of meadow type with forest bulrush, Filipendulo-Geranietum herb communities, horse mint community, flutter-rush pastures and communities with wood small-reeds belong to this group.
Non-forest vegetation occurs on approximately 55% of the area and constitutes more than two-third of all plant communities and communities of similar phytosociological value found on the park's area. Therefore, it should be noted that non-forest groups play crucial role in preservation of reeds, herbs, moors, grasses, meadows and pastures communities. Such groups constitute a main biotope for many rare and endangered plant species subject to legal protection, e.g. species from the Orchidaceae Juss. fammily. Flowery grasses, meadows and herbs are populated by remarkable variety of invertebrate species (especially insects), which are much more diverse in comparison to those inhabiting forest communities.
Non-forest communities are better protected due to traditional methods of agriculture, especially connected with meadows and herding activities.
Czarnorzecko-Strzyżowski Natural Landscape Park's location next to the division line between Eastern and Western Carpathians and significant diversification of climate conditions determines richness and diversity of vegetal cover, including wood stands. Natural forest communities take up approximately 79.8% of the entire forest's area. Two vegetation levels may be found on the geobotanical area of the Strzyżowsko-Dynowskie Highlands part of which covers the entire park, namely: lowland layer and sub-montane level (approximately 7% of the forest area).
Predominant communities populating sub-montane forests include Carpathian beech (Dentario glandulosae-Fagetum) and acidophilous beech (Luzulo nemorosae-Fagetum). Approximately 11.3% of the forests area is covered by fir-tree communities connected mainly with relatively flat slopes and flat areas between the mountain ridges in central and south-eastern part of the park. Oak-hornbeam forest takes up over 15.7% of the entire forests area. Riparian phytocenoses overgrow river valleys and are represented by: ash-alder riparian forest and sub-mountaneous ash riparian forest, transitional complexes and very rare complex of the Alnetum incanae alder forest. Riparian forests constitute approximately 1.4% of the entire forests area. Marshy Caltho-Alnetum Zarz alder forests overgrowing boggy land depressions are of marginal importance. Communities which developed on farmlands with predominant role of pine forests may be found across the entire area as well.

CULTURE
The Czarnorzecko-Strzyżowski Natural Landscape Park's uniqueness should be attributed not only to its environmental merits, but also to precious architectural monuments, especially churches, manors and palaces. Beauty of the Strzyżowskie and Dynowskie Highlands lies in perfect harmony of natural and cultural elements of the landscape.

The most interesting tourist sites include:

Blue trail – leads from Dębica across Grudna Górna, Berdechów, Klonowa Góra mountain range, Bard and Chełm mountain crests, Chytrówka and Wiśniowa. Trail leads from Wiśniowa out to a long and wooded ridge of the Jazowa mountain range, running across Herby and Czarnówka. Then it descends to Rzepnik nearby the old Orthodox church and takes us to the upper village. Now it heads in the direction of the Wólka hamlet, intersects Polana and climbs up on the Królewska Góra (here it unites with the green trail) and leads us to the ruins of the Kamieniec castle’s.

Green trail – runs from Strzyżów to the Brzeżanka's crest, here it leads us accross Bonarówka on the Czarny Dział mountain range. Then it passes through Węglówka village and runs up on the Królewska Góra (where it connects with the blue trail) and leads further to the castle boroughs on the Kamieniec hill with exquisite castle ruins. From the castle debris, it leads to Korczyny, runs across Korona hill and ends its run in Krosno.

Yellow trail – starts in Kołaczyce; runs across the park's area through Głogów, Huta Gogołowska, Bardo and ends in Czudec.

Green Trail – runs from Frysztak across Kamienna mountains and Bardo to Brzeziny and further to Ropczyce.

Black trail – leads from the Czarny Dział hill (from the place where it connects to the Green Trail) across Węglówka, Sucha Góra, Czanorzeka and ends its run in the Castle Boroughs, where it merges with the green trail again 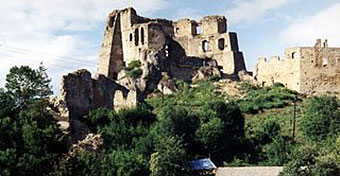